The state’s electric grid was experiencing rapid and unprecedented changes even before Pacific Gas & Electric and Southern California Edison began shutting off power to millions of people in a desperate scramble to prevent their transmission lines from sparking wildfires.

Solar and wind power were booming. Gas-fired power plants were shutting down. Investor-owned utility companies such as PG&E and Edison were being replaced by city-run alternatives. And the falling cost of lithium-ion batteries was making some households less reliant on the grid than ever before.

The changes will only accelerate in the coming years, as California ramps up efforts to fight climate change by cleaning up its energy supply.

But the state’s plans for slashing climate emissions depend on a stable electric grid delivering clean electricity to the cars, homes and businesses of the world’s fifth-largest economy. The jarring new reality of preemptive blackouts could frustrate those plans by throwing the grid’s reliability into doubt.

“The issue of reliability is really put front and center by the anxiety that people are starting to feel about their electrical system, even if they’re not subject to the blackouts,” said Michael Wara, a Stanford University professor who was appointed by Gov. Gavin Newsom to a commission on wildfire costs. 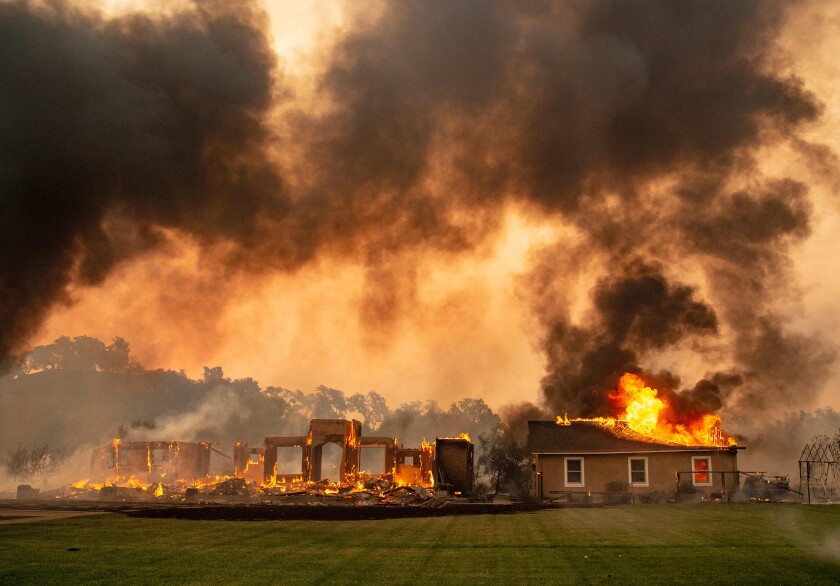 A building is engulfed in flames at a vineyard during the Kincade fire near Geyserville, Calif., on Oct. 24, 2019.

That anxiety could complicate efforts to “electrify everything,” the mantra adopted by a growing number of climate activists and state policymakers.

The basic idea is that as the electricity supply gets cleaner — more than half of California’s power came from climate-friendly sources last year, and lawmakers have mandated 100% by 2045 — the state can use clean electricity to replace oil and gas in transportation and buildings. Think electric vehicles instead of cars and trucks that run on petroleum, and electric heat pumps and cooktops instead of traditional gas furnaces, water heaters and stoves.

The natural gas industry has warned that electrifying buildings could be a big mistake, citing the Public Safety Power Shutoffs, as the precautionary blackouts are formally known.

Southern California Gas Co. — which is engaged in a sweeping campaign to preserve the role of its pipelines in powering society — told the state’s Public Utilities Commission in August that communities affected by preemptive blackouts “need a hedge other than electricity for obvious reasons: Electricity is the one energy supply that will be turned off.” Those communities could use gas-powered microgrids (PDF) to keep the lights on, the gas company suggested.

Similarly, the advocacy group Californians for Balanced Energy Solutions — which has received funding and political support from SoCalGas — tweeted about PG&E’s first round of preemptive blackouts this month, writing that policymakers should be wary of “putting all eggs in one energy source basket.”

“We must consider all energy methods to mitigate drastic and widespread impact,” the pro-gas group wrote in another tweet the next day. 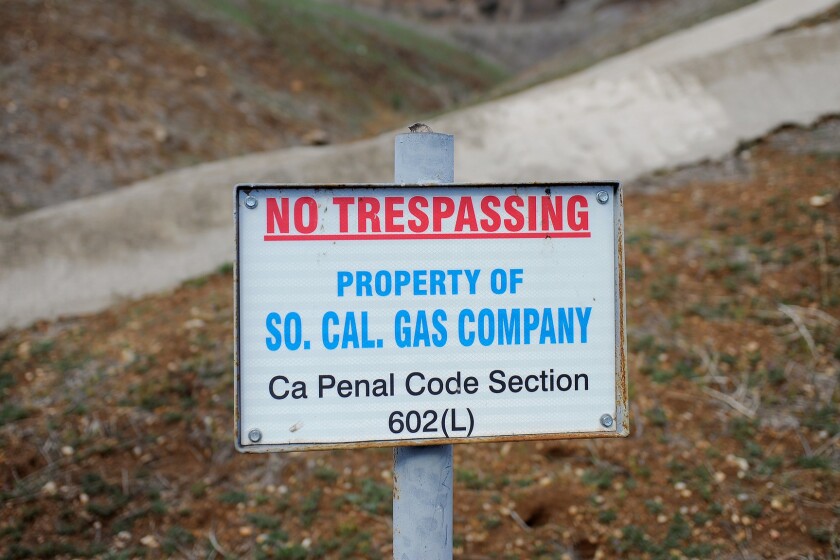 California ditched coal. The gas company is worried it’s next

Those types of warnings could have “a serious potential negative consequence” on efforts to slash planet-warming carbon emissions, said Severin Borenstein, a UC Berkeley energy economist who serves on the board of the California Independent System Operator, which oversees the power grid.

“The best hope we have of dramatic decarbonization is through electricity,” Borenstein said. “And that is going to be through an electrical grid.”

For that reason, it’s important not to let reliability concerns get in the way of electrification, Borenstein, Wara and some other energy experts say.

They point out that many gas appliances actually need electricity to operate, as do smart thermostats such as Google’s Nest. Although gas fireplaces and cooktops work during an electricity outage, gas furnaces generally don’t. Neither do tankless gas water heaters, unless they have battery backup.

Electrification proponents also say phasing gas out of homes and businesses will take decades. Public Safety Power Shutoffs, on the other hand, could become less common within a few years as electric utilities harden their infrastructure, even if the phenomenon doesn’t go away entirely. 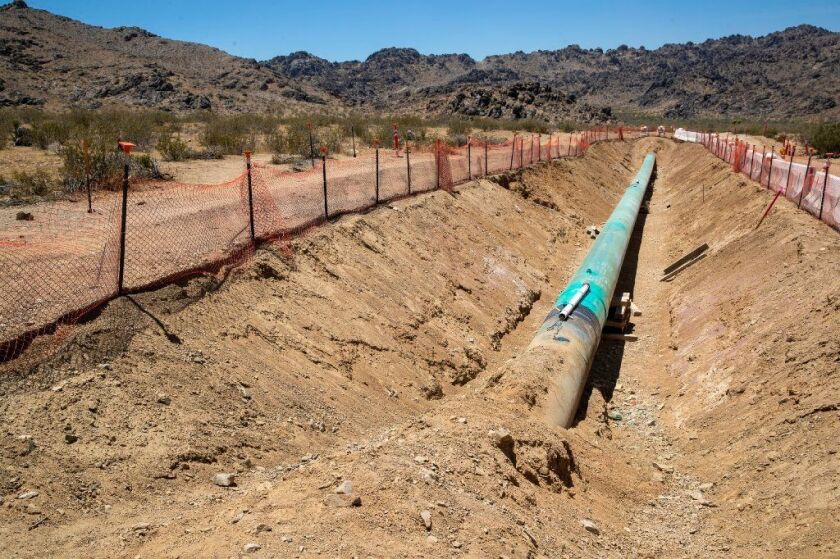 Southern California Gas Co.’s Line 235, seen on July 8, 2019, brings natural gas through the desert toward the Los Angeles Basin. The pipeline was out of service for two years following an October 2017 explosion near Newberry Springs, Calif.

Gas pipelines have their own reliability problems, said Maximilian Auffhammer, an environmental economist at UC Berkeley. He cited the PG&E pipeline explosion that killed eight people in San Bruno in 2010, and the massive methane leak at SoCalGas’ Aliso Canyon storage field in 2015-16.

“Nothing’s perfect. There is no perfectly safe way of delivering electricity or gas to people’s homes,” Auffhammer said. 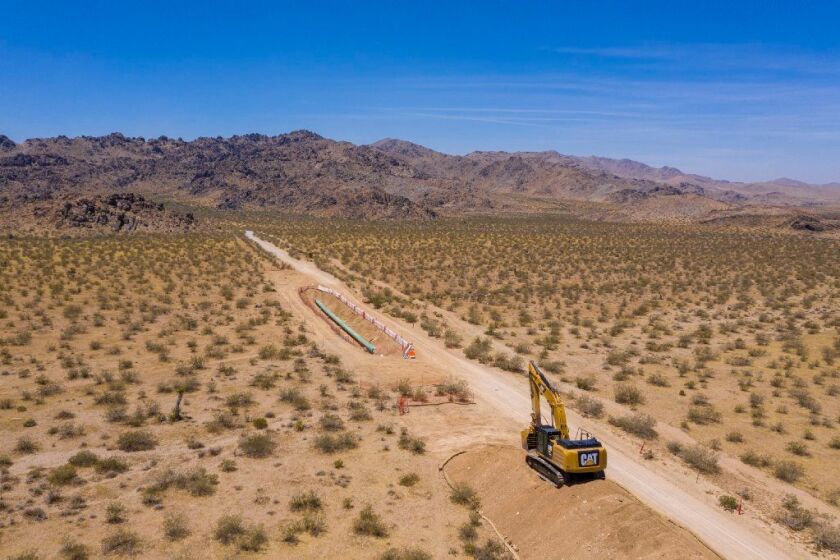 Asked about the electric grid shutoffs, SoCalGas spokesman Chris Gilbride said it’s increasingly clear that the state needs “more than an oversimplified, one-size-fits-all approach to energy use in buildings that balances our climate goals with the diverse needs of California’s 40 million residents.”

“This is not a debate about which appliances work best in a power outage or natural gas versus electricity for that matter,” Gilbride said in an email. “This is about how best to keep Californians safe and provide every family and business with the affordable, reliable and resilient energy services they need.”

Electrification advocates, though, see a looming battle between natural gas and electricity, with the power shutoffs as a wild card. They say local governments and state policymakers must limit the effect of the preemptive blackouts and make sure California’s climate programs aren’t derailed.

Perhaps the most obvious solution is helping homes and businesses install backup power systems, such as solar panels paired with batteries. The state ought to provide funding for low-income households that can’t afford to spend tens of thousands of dollars on those systems, Borenstein said.

Government-run energy providers known as community choice aggregators, or CCAs — which now serve about one-quarter of California residents — say they could play a major role in helping homes and businesses install rooftop solar systems and batteries to protect themselves against blackouts.

CCAs don’t operate the poles and wires at the heart of the state’s wildfire crisis — that’s still the job of investor-owned utilities across most of the state. But they are responsible for electricity rates and customer incentive programs, and many of them have chosen to prioritize local energy resources. 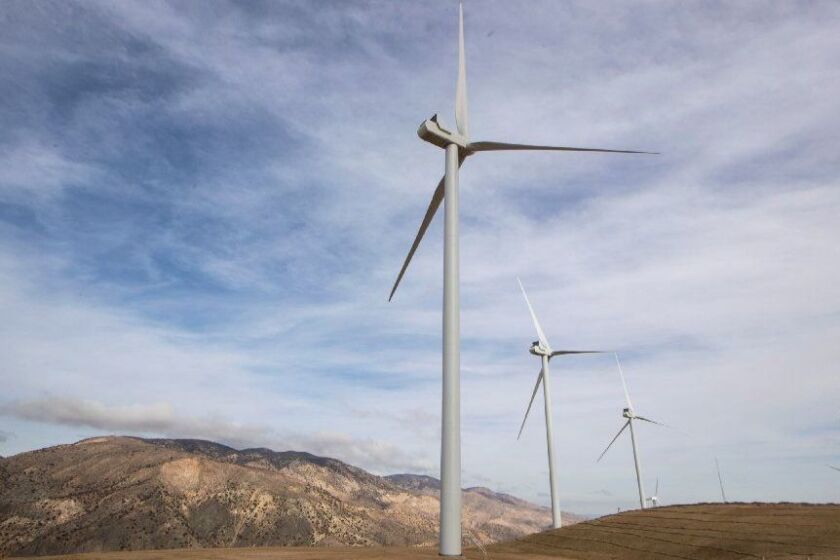 Basically, the CCA will pay Sunrun for the right to draw power from the solar-plus-storage systems. And when PG&E’s electric grid goes down during a preemptive power shutoff or other emergency, those low-income homes will be able to keep the lights on, East Bay Chief Executive Nick Chaset said. 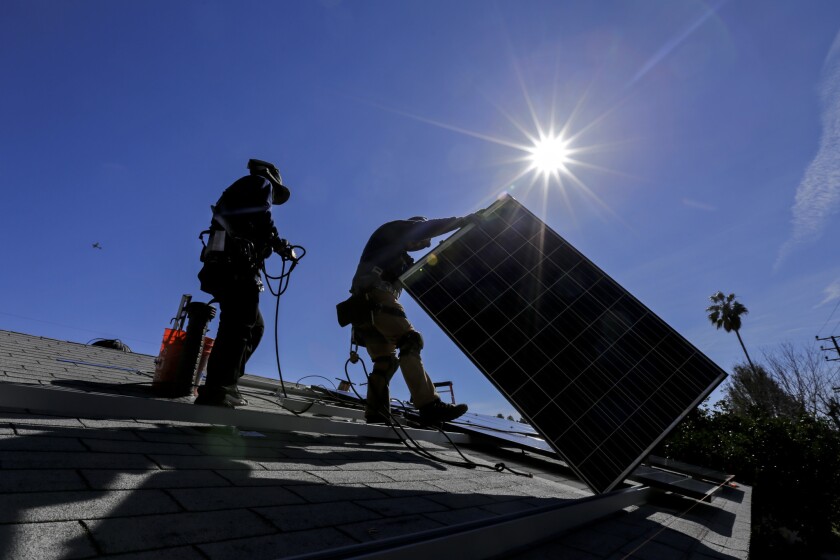 A Sunrun crew installs a rooftop solar system at a house in Van Nuys.

East Bay is planning a much larger purchase of similar solar-plus-storage resources. This time, the CCA may tell potential vendors to prioritize homes most likely to have their power shut off preemptively by PG&E, or perhaps customers who depend on medical devices that run on electricity, Chaset said.

“So far, we have not seen PG&E come out and do this,” he said. “This is more in the wheelhouse of a CCA.”

Some experts are thinking about ways to make PG&E and other for-profit utility companies more supportive of customer-owned power sources.

Kristov has been working with two clean energy advocacy groups on a proposal (PDF) to convert PG&E to an “open access distribution system operator.” It’s a fancy way of saying that the beleaguered utility — which filed for bankruptcy protection earlier this year in the face of tens of billions of dollars in potential wildfire liabilities — would largely become a poles-and-wires company, more interested in facilitating electricity transactions than in selling power.

In Kristov’s vision, PG&E shareholders would be rewarded when the utility works with clean energy developers and local governments to promote “distributed energy resources” such as rooftop solar panels, community microgrids and solar-plus-storage systems at hospitals and other crucial facilities. 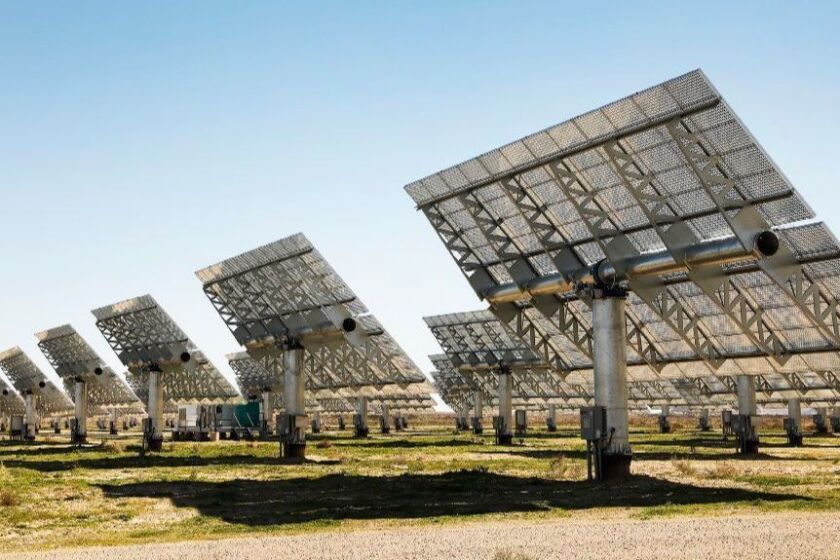 Utility customers who reduce their dependence on the grid could avoid another pitfall of electrification: The likelihood of electric rate increases as PG&E and Edison spend billions of dollars insulating wires, trimming trees, building weather stations and taking other steps to limit wildfire ignition risk.

Mike O’Boyle, director of electricity policy for San Francisco-based research firm Energy Innovation, said electrification is key to California’s climate goals. But consumers already pay more for electricity than they do for gas. A widening price gap could “tip the scales” against electrification, O’Boyle said.

“We need to have affordable, cheap, clean electricity,” he said. “If we don’t have that, it’s going to stand in the way of progress.” 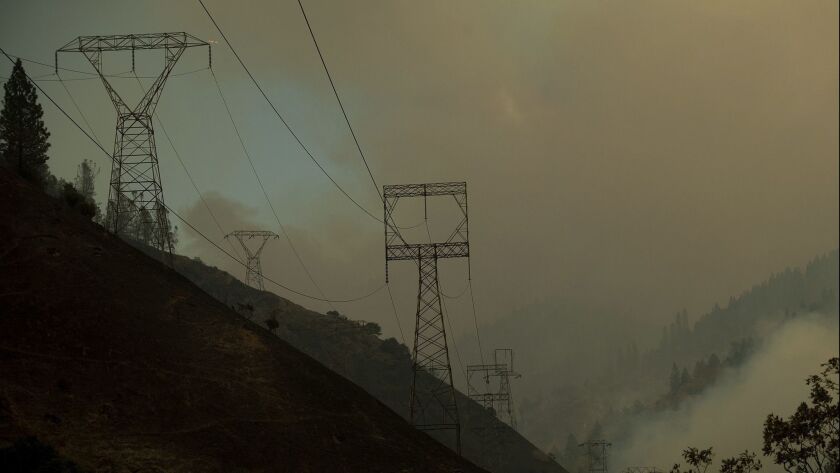 Power transmission lines crest a hilltop above Camp Creek Road, the point of origin of the Camp fire, in Pulga, Calif., on Nov. 11, 2018.

A GRID IN TRANSITION

Wildfires and blackouts are far from the only challenges facing California as the state works toward a goal of 100% clean energy by 2045.

In the short term, energy regulators are worried the planned shutdown of three Southern California gas plants will threaten reliability by making the state too dependent on solar and wind farms, which generate electricity only when the sun is shining or the wind is blowing. In the long run, there’s no good solution yet for how to run a grid dominated by solar and wind power, particularly during periods when the sun and wind disappear for days at a time.

Then there’s the Diablo Canyon nuclear plant, which can generate electricity around the clock and is California’s single largest source of climate-friendly power.

State officials approved an agreement between PG&E and environmental groups to replace the nuclear plant’s output with a combination of renewable energy and storage. But the details of that replacement power are yet to be determined, and critics say natural gas use is likely to rise.

Consumers, meanwhile, are increasingly being asked to change the way they use energy.

Electric utilities are implementing time-varying rates meant to encourage people to use more energy in the afternoon, when solar power is plentiful, and less in the evening.

Electric cars and home batteries could help consumers balance out their demand — if they charge and discharge strategically. Some experts have also called for larger “demand response” programs where utilities pay customers to cut back when extra power is needed on the grid.

Transitioning to an emissions-free power grid was never going to be easy, said Carl Zichella, director of western transmission for the Natural Resources Defense Council, a nonprofit environmental group. The threat posed by fires to grid reliability makes the work even harder, he said, but not impossible.

“This is something we cannot shirk. We have to get ahead of it,” Zichella said. “I don’t see any diminishment of the intensity or interest in doing this.”