It’s official -- EBCE is going carbon-free by 2030. At its December 16 meeting, the EBCE board committed to moving to 100% clean energy over the next decade, 15 years ahead of the state's official target date.

EBCE joins a growing list of states, utilities, corporations, and cities that have made zero-carbon commitments.

The California legislature approved SB 100 in 2018, requiring an emission-free power supply by 2045, with an interim goal of 60% renewable electricity by 2030. To date, 16 other states plus Puerto Rico and the District of Columbia have adopted laws and regulations committing to 100% clean power sectors, with deadlines no later than 2050.

So far 50 utilities have made zero-carbon pledges. Over 180 local governments have signed on to Sierra Club's “Ready for 100” campaign to move to 100% renewable energy, including Albany, Berkeley and the Oakland Unified School District. The UN’s global “Race to Zero” campaign has enrolled 22 regions, 452 cities, 1,101 businesses, 549 universities and 45 of the biggest investors to make net-zero pledges.

EBCE member cities are doubling down on the opportunity to use low-cost EBCE power to cut carbon emissions. Berkeley, for example, recently found that a 78% drop (PDF) in power sector carbon emissions from switching to EBCE made up the bulk of their overall 26% drop since 2000. A number of member cities have opted up municipal and other accounts to the emissions-free Brilliant 100 option or the wind-and-solar Renewable 100. So far, about ten percent of EBCE customers are on greener products — 9 percent on Brilliant 100 and 1.3 percent on Renewable 100.

EBCE’s current base of energy procurement is 46% renewable, with additional carbon-free energy supplied by hydroelectric power. Most of this renewable and hydroelectric power is provided by short-term contracts with existing resources. EBCE’s portfolio of newly contracted resources are just beginning to come online.

“From the first day that I joined EBCE, we’ve really pushed to think boldly about the long term clean energy trajectory for EBCE,” CEO Nick Chaset told the board at the December meeting. “How do we get cleaner, and how do we get there faster?”

While EBCE’s current portfolio already has low emissions, it relies in part on power from out-of-state hydroelectric generators that have operated for decades. While they have no direct emissions, power from these projects is not eligible for the California renewable portfolio standard (RPS).

“What we’re talking about with the new goal is an investment in clean renewable energy in our community and across California,” said Chaset.

EBCE’s recent procurement trends have been toward more wind and solar, with contracts for over 550 MW of new generation capacity, plus 150 MW of storage. Clearway Energy recently completed a new solar project in Kern County that will supply EBCE with 112 MW of power. More contracted projects will come online over the next one to two years, and another solicitation for new projects is already underway.

EBCE customers also continue to invest in clean energy. As of October, Alameda County was home to over 40,000 distributed solar systems, adding up to 280 MW of customer-owned solar capacity. (EBCE serves most of the county.)

“The price of solar has come down, and now storage prices are dropping too, making it a really attractive investment,” she says. “As we try to maximize renewable energy, the storage gives us the ability to shift generation to the times of greatest need.”

“Still, there are diversity benefits to other resource types,” she notes. “Things like geothermal and high capacity wind power can help round out a solar-and-storage portfolio.”

The state will see some big changes to power supply in the coming years. The Diablo Canyon nuclear plant is scheduled to retire by 2024-25, along with a number of gas power plants along the coast, to reduce the impacts of thermal discharges into coast waters. The August 2020 blackouts put a greater sense of urgency in finding solutions.

“We have to be careful that the investments we are all making add up to a reliable grid,” Tanenhaus says.

EBCE’s part of the state strategy is laid out in its Integrated Resource Plan (PDF) (IRP), a 10-year plan required by the CPUC from all state power suppliers.

To develop the IRP, Tanenhaus and her team tested four scenarios for the future, based on various greenhouse-gas reduction targets and clean power portfolios by the year 2030. Two scenarios were required by the CPUC, reflecting statewide electric-sector carbon emission goals by 2030 of 46 million metric tons (MMT) and 38 MMT of CO2. But Tanenhaus’ team also looked at a more aggressive goal of 30 MMT and a net-zero target for EBCE.

EBCE’s share of these emission goals ranged from 1.22 MMT in the high case, down to zero in the lowest case, as shown in the table. 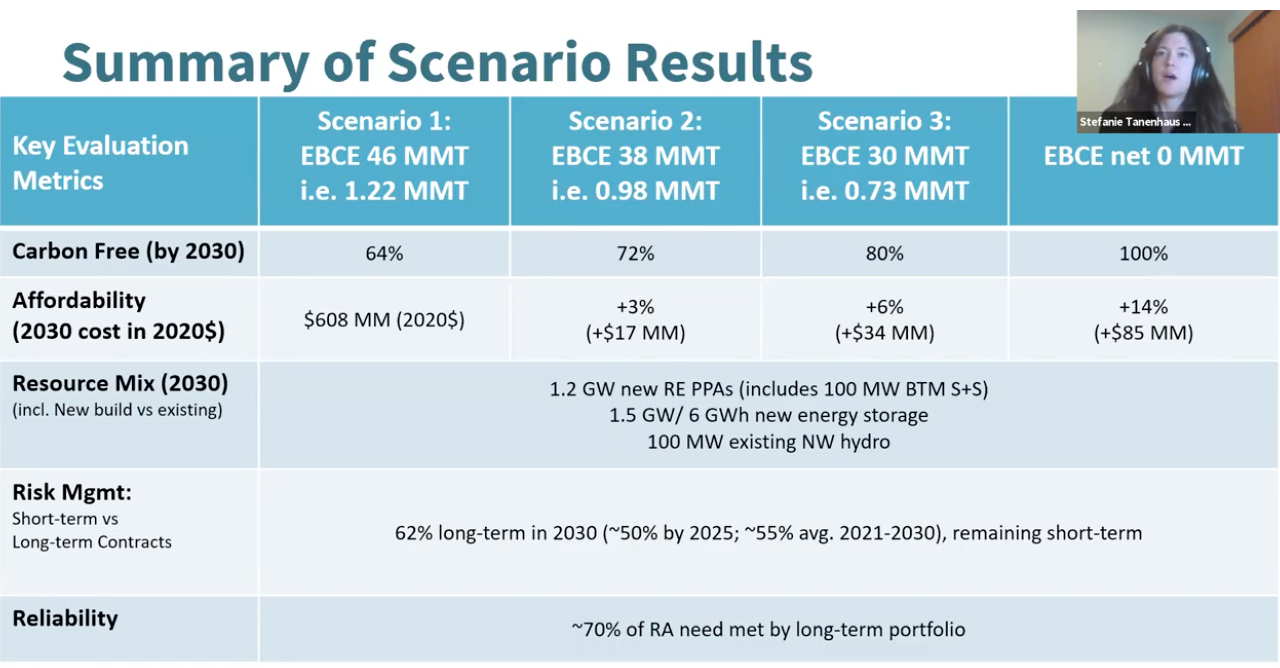 EBCE’s Stefanie Tanenhaus presents the IRP to the EBCE board on a Zoom call.

To put these emissions in context, the one million gasoline vehicles registered in Alameda County put out about 5.35 MMT of CO2 per year.

The strategy Tanenhaus laid out in the IRP was to have a core portfolio of long-term contracts that would meet about two-thirds of EBCE’s demand over the next decade, supplemented with short-term purchases to cover the rest.

The core portfolio would reach about 3,500 MW of generation capacity by 2030, including 1,600 MW of energy storage. Because of federal tax incentives, a significant amount of the storage would likely be paired with solar. Tanenhaus expects that EBCE would need to buy about 1,220 MW of new renewable resources over current levels, which would largely come from solar, given current price trends. This would put EBCE’s long-term portfolio of RPS-eligible renewable energy near 65%, or 5% over the state target by 2030. EBCE would pair this portfolio with shorter-term contracts for carbon-free energy to get its annual emissions down to zero by 2030.

The shorter term contracts would largely be signed in the later 2020s, allowing for greater flexibility in response to market conditions and customer demand.

Demand is especially a wild card, due to population and economic growth, the electrification of vehicles and buildings, and the ongoing adoption of solar by EBCE customers. Tanenhaus says the IRP modeling assumed around a tenfold increase in distributed solar, but that hinges on consumer decisions.

Board member Al Mendall of Hayward strongly supported the move to 100%, but emphasized the flexibility of the decision. “If something happens in 2028 or 2029 and the costs are looking too astronomical, the board can revisit those short-term contracts,” he said at the board meeting. “But I think it’s important that we set the course for 100% greenhouse-gas free.”

The total portfolio costs were estimated at $608 million (in today’s dollars) in 2030 in the base case. The cost of the three cleaner scenarios rise by 3%, 6% and 14% respectively, making the zero-carbon scenario about $85 million higher in 2030 than the highest emission scenario.

Mendall was serving on his last board meeting before retiring from the Hayward City Council. “I’m glad I hung around long enough to get to vote on it, since I’ve been pushing for it for a long time,” he said. “I hope that’s something that unites us all.” The board approved his motion for 100% clean power unanimously. 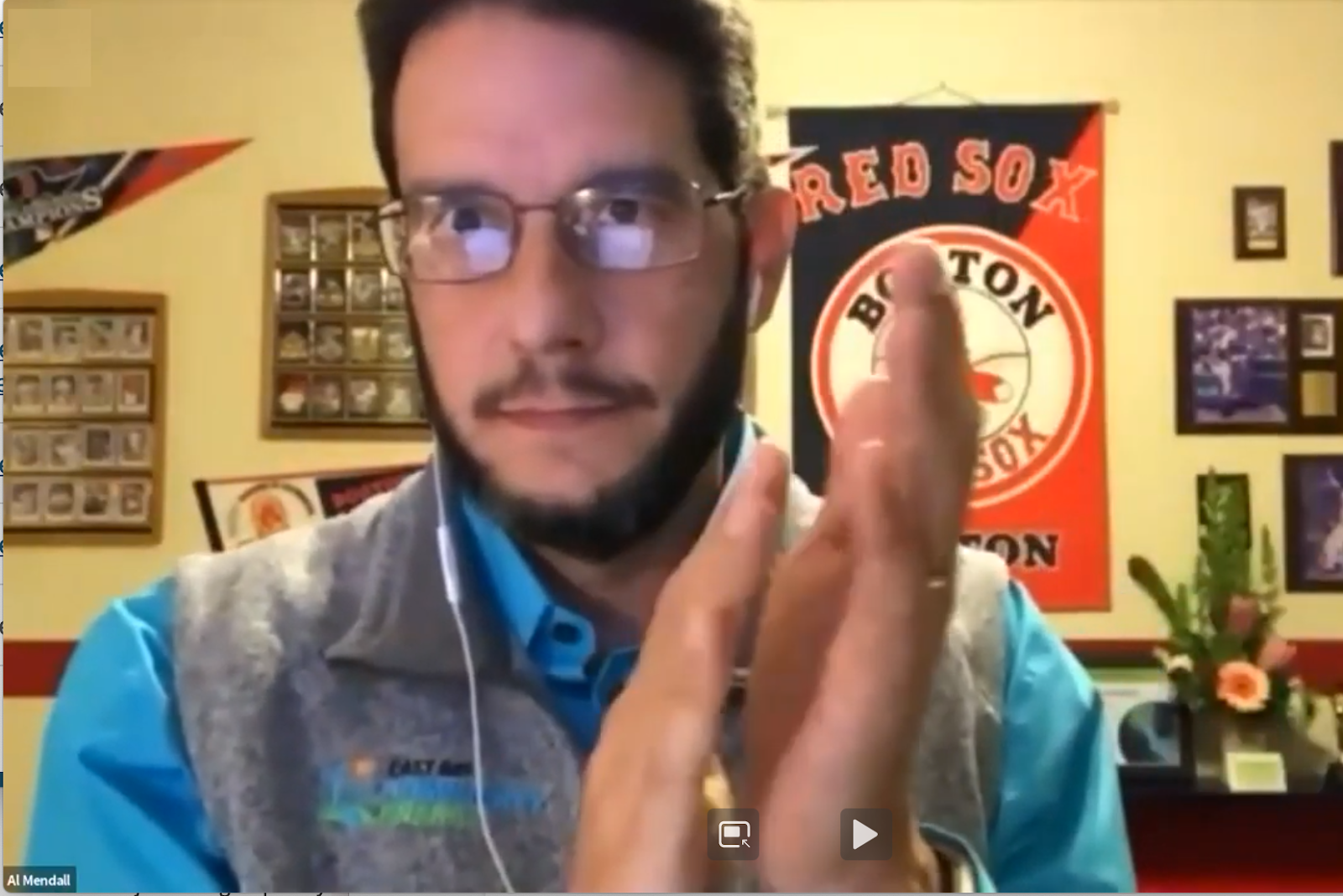 Board member Al Mendall applauds after the board unanimously approves his motion to commit to 100% clean energy.