JP Ross speaks at an electrification forum in Berkeley, April 2019

The Future of Building is Electric

California cities, including EBCE members, are pursuing aggressive decarbonization goals to help fight climate change. A big part of that is replacing natural gas use with low-carbon electricity in buildings.

“If we are burning fuels in buildings and vehicles, we won’t solve climate change,” says JP Ross, EBCE’s Senior Director for Local Development, Electrification and Innovation. “We need to get the fuels out.”

EBCE is helping member cities by providing $400,000 worth of technical assistance on building electrification strategies, including consulting support and grants to cities. So far seven cities have taken up the offer.

“A reach code is when a city goes above and beyond requirements in the state code,” explains Ross. “The reach codes we are supporting our cities to implement will require all-electric construction, or at least heavily de-incentive gas as well as require electric vehicle charging infrastructure in new construction.”

While electrification is coming along, much work remains to convince builders and homeowners to make the switch.

“Developers support the concept, but are nervous about implementation,” says Ross. “An all-electric building is cheaper to build, since you don’t have the gas lines. They like that part but are nervous to be doing something new or unproven, and worry about how cities will respond to it. Will it delay their permits and plan checks? EBCE support for cities is intended to smooth the way.”

For customers, the challenge to overcome is cooking, even though it is a small part of residential gas consumption. “People don’t care so much about space heating and water heating, as long as they work,” says Ross. “But there is a heart pull about cooking, and people think of their grandmother’s lousy electric resistance stove, and they don’t want that. The good news is that modern induction cooktops and stoves are far superior for cooking, even beating gas cooktops for power and performance ”

To get people familiar with newer electric induction cooktops, EBCE is planning to develop a mobile induction cooking demonstration kitchen to take to farmers’ markets and other public events, so residents can see how superior new electric cooking can be.

We are all being tortured by melting chocolate at #berkmtg. CM @KateHarrisonD4 mentioned strawberries too. It’s part of her presentation to prove that induction heat is better than gas. Fondue bribes anyone?? 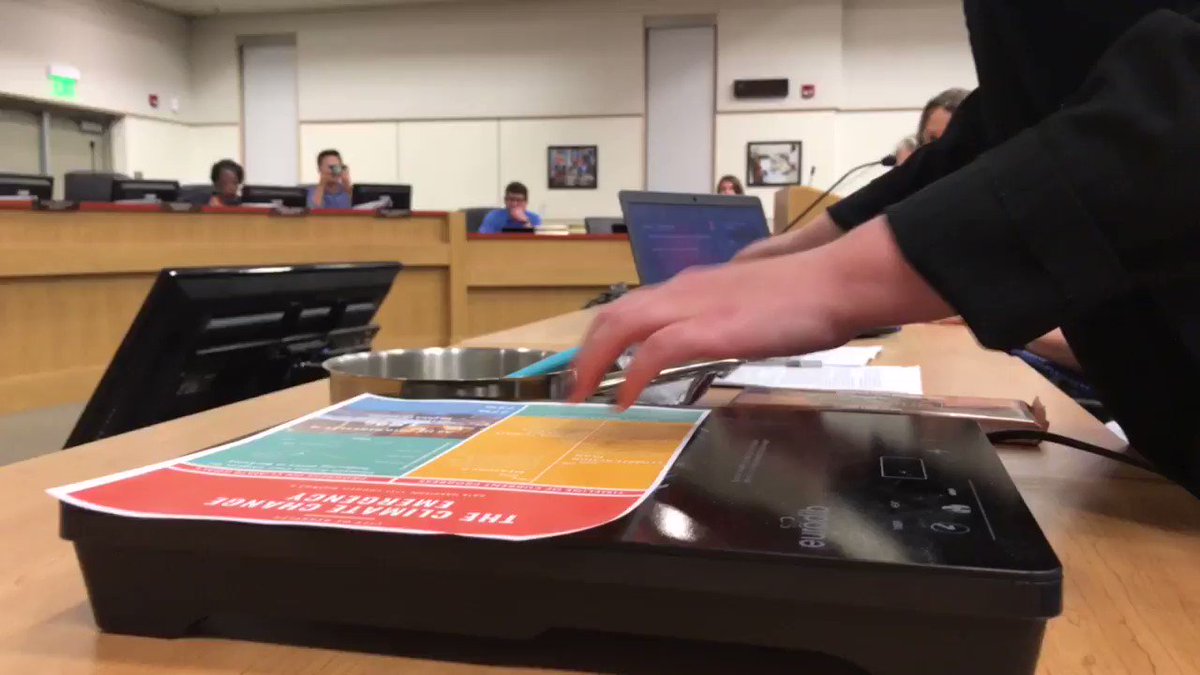 This “gas ban” garnered international headlines, and has inspired a wave of other cities to look at following suit. As many as 50 California cities are looking at it, including Oakland, along with Seattle and Brookline, MA.

The move is in line with Berkeley’s voter-approved climate action plan from 2006, which aims to cut greenhouse gas emissions by 80% below 2000 levels by 2050. More recently the city council declared a Climate Emergency and set a goal of becoming “fossil fuel free” by 2030.

Harrison, author of the legislation, was motivated not just by the climate benefits, but by the benefits to safety, energy resilience, and indoor air quality. The natural gas system, since it is largely underground, is at high risk of disruption from earthquakes, a major concern for city officials as the Hayward fault cuts through the Berkeley hills.

In a 2014 report, the Association of Bay Area Governments (ABAG) estimated that a magnitude 7.9 earthquake (comparable to the 1906 earthquake) could knock out electricity supplies for a week and natural gas supplies for up to six months.

But the reach codes and gas ban, so far, cover only new construction. A bigger concern is how to get the gas out of existing buildings.

A recent state utility commission ruling may be a major step in that direction.

Until recently, the state’s billion-dollar annual energy efficiency fund could not be used for fuel switching, such as replacing gas appliances with electric — even if there was a major efficiency boost. An electric heat pump water heater is four times more efficient than a gas heater, for example.

In an August vote, the commission opened up the fund to beneficial fuel switching. Once new programs are developed, this decision could unleash hundreds of millions of dollars to help with building electrification.

“That’s going to be huge for electrification,” says Ross.

He also cites SB1477, passed in 2018, that earmarks $50 million per year for the Technology and Equipment for Clean Heating (TECH) Initiative, a statewide market development program for low-emission space and water heating equipment.

“We need a market transformation in the heat pump space,” says Ross. “Those are big loads and the pricing is still high. It’s still early days, and that means higher cost.”

The reach codes could also help with market transformation, especially if they go statewide.

Ross credits city reach codes that required solar on new homes, from Lancaster, Fremont, Santa Monica and others, for spurring the state Energy Commission to include a similar solar requirement in the 2019 state code. He thinks the same can happen with reach codes for all-electric construction.

“The long play is that we want all-electric code to be statewide,” he says. “The CEC saw the solar mandate in the cities and saw that it worked. We hope in the 2023 code there will be enough momentum from these reach codes to go all electric across the state.”