A new contract with a geothermal energy plant will diversify EBCE’s fuel mix. 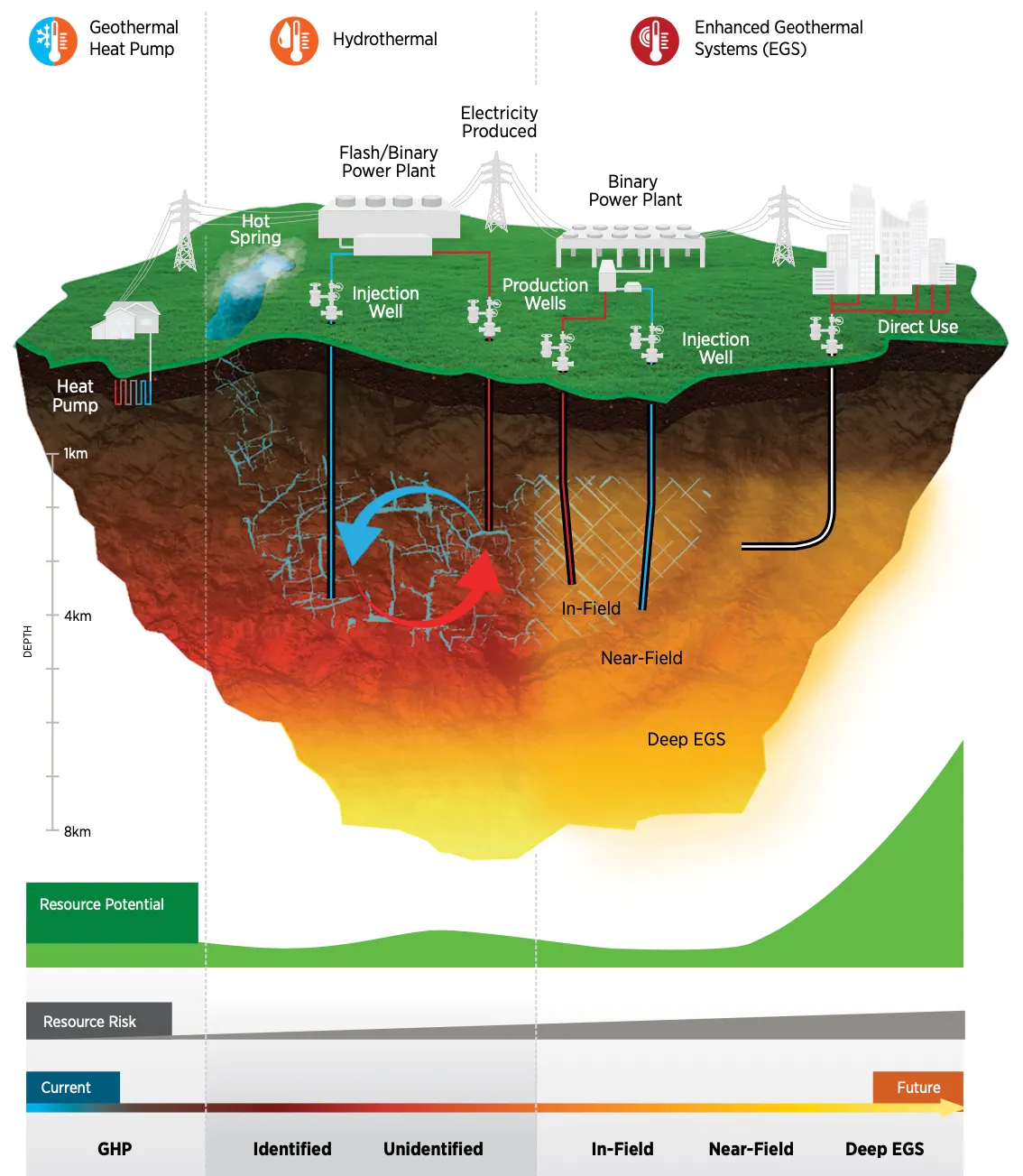 Source: US Department of Energy

Electricity from geothermal energy will be coming to power EBCE customers, as the EBCE board approved a contract for 40 megawatts of power from a geothermal generator in Nevada.

The project delivers a number of firsts. It will be the first geothermal power in the EBCE portfolio, the first plant built by the developer, Fervo Energy, and the first contract signed in response to a recent state utility commission order for “clean firm” power.

The order stemmed from the retirement of more than 3,700 MW of natural gas plants and 2,200 MW from Diablo Canyon Nuclear Power Plant. The CPUC specified that “at least 1,000 MW must be obtained from long duration storage resources (eight hours or greater), and at least 1,000 MW from clean firm resources such as geothermal.”

Clean means with no carbon emissions, and firm means that it can provide power whenever needed, for as long as needed. And geothermal energy means it is hot.

Geothermal is not a new energy source for California. The Geysers project in Lake County, north of the Bay Area, was the first geothermal power generator in the Western hemisphere and is still the largest, with 28 power plants putting out 2,034 megawatts, enough electricity to meet about 3% of state demand. The first commercial well was dug in 1954, while the first power generator came online in 1960.

The Geysers, like most commercial geothermal plants, tap resources where heat and high-temperature hot water are near the surface. Drilling down into the resource brings the heat to the surface where it runs a steam generator.

California is the geothermal leader by far among US states, and indeed has more geo-power than any other country. Projects are also found in other Western states, Hawaii and Alaska, but none are east of Colorado.

As a dispatchable and zero-carbon power generator, geothermal makes a good companion to wind and solar generators to fill in the gaps when the wind doesn’t blow and the sun doesn’t shine. But ironically, the low cost of wind and solar in Western states has stalled geothermal energy deployment. The figure shows estimates by Lazard of power costs, with solar and wind leading the pack. 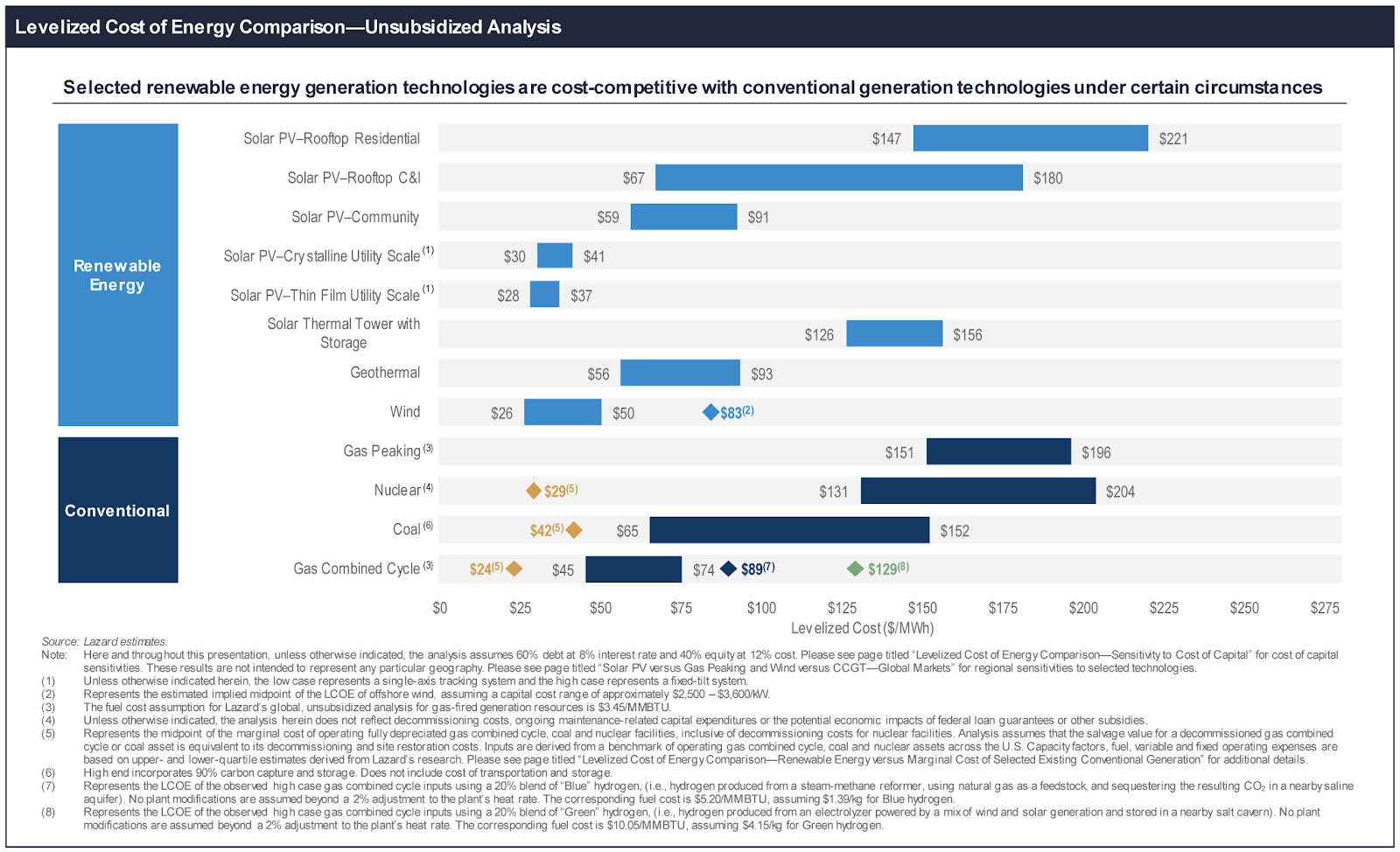 While the California renewable power standard (RPS) policy has long expressed a goal for a portfolio of “least cost/best fit” resources that combine to build a workable power system, energy buyers and regulators have focused more on price than on system integration. The result has been vast amounts of solar power, increasingly combined with batteries to meet evening power demand. Utility-scale solar now provides 20 percent of the state’s electricity supply, and continues to grow.

But the solar + storage combination has its limits, especially in winter or rainy periods. Geothermal power helps fill in those gaps with a diversified and reliable year-round source.

Tim Latimer, CEO at Fervo Energy, says state 100% clean electricity standards and corporate commitments have expanded the ambition, requiring more than just additional solar. “Study after study shows that if you want a true carbon-free grid instead of just 60-80%, you need to have a clean firm power resource like geothermal as a portion of the grid mix,” he says.

While the need for a clean firm source is driving the rebirth of geothermal, so too are some new technologies and strategies that are reducing development risks.

The biggest risk for new geothermal is similar to the risk of drilling for oil or gas -- the “dry hole” problem. You just don’t know what’s down there until you find it (or don’t).

To address that risk, oil and gas companies have developed “directional drilling” rigs that can change direction underground, allowing more accurate control. Another innovation is hydraulic fracturing, also known as fracking, that breaks up underground rock formations to get the fuel out. Fiber optics enable drillers to see down in the hole and greater computing power can better analyze geological formations.

These technologies are being applied to geothermal energy, helping cut the risk of bad holes, and opening new regions to development. Of course, geothermal developers are looking for heat, not oil and gas.

Latimer argues that this has made obsolete the conventional wisdom of geothermal as an expensive option. “Drilling technology is just dramatically better than it was a decade ago, driven largely by major advancements in the oil and gas industry,” he says. “Yet the commonly cited public cost models use data over a decade old, as if drilling tech has been stagnant.”

There are more ideas in the labs for “enhanced” and “advanced” geothermal, to harness low-temperature heat found in more parts of the world, but farther underground. The US Department of Energy awarded $8.4 million to research extracting heat from tapped-out oil and gas wells.

So far, EBCE has contracted for 775 MW of new wind, solar, and storage projects. To find more resources, EBCE released a request for offers (RFO) in 2020 for new generation and storage, which Fervo responded to.

The Fervo project is a 115 megawatt geothermal plant east of Reno, Nevada, expected to come online by late 2026. EBCE is taking a 40 megawatt share, with a fixed-price long-term contract. Fervo will also be supplying Google’s data center near Las Vegas. Google is pioneering the use of “24/7” power from clean sources to meet their data center needs with zero-emission power.

This is Fervo’s first geothermal plant, though the Fervo team has developed over 1000 megawatts of other projects, including the Hudson Ranch Geothermal Plant near the Salton Sea, completed in 2012. They are currently working with Princeton University under a DOE grant to study how to make geothermal operations more flexible.

EBCE released another RFO for long-term resources in the first quarter of 2022, in conjunction with San Jose Clean Energy. Winners of that solicitation will be announced in the fall.