The rising cost of electricity is making it harder to decarbonize California. EBCE and others are looking for ways to cut utility bills. 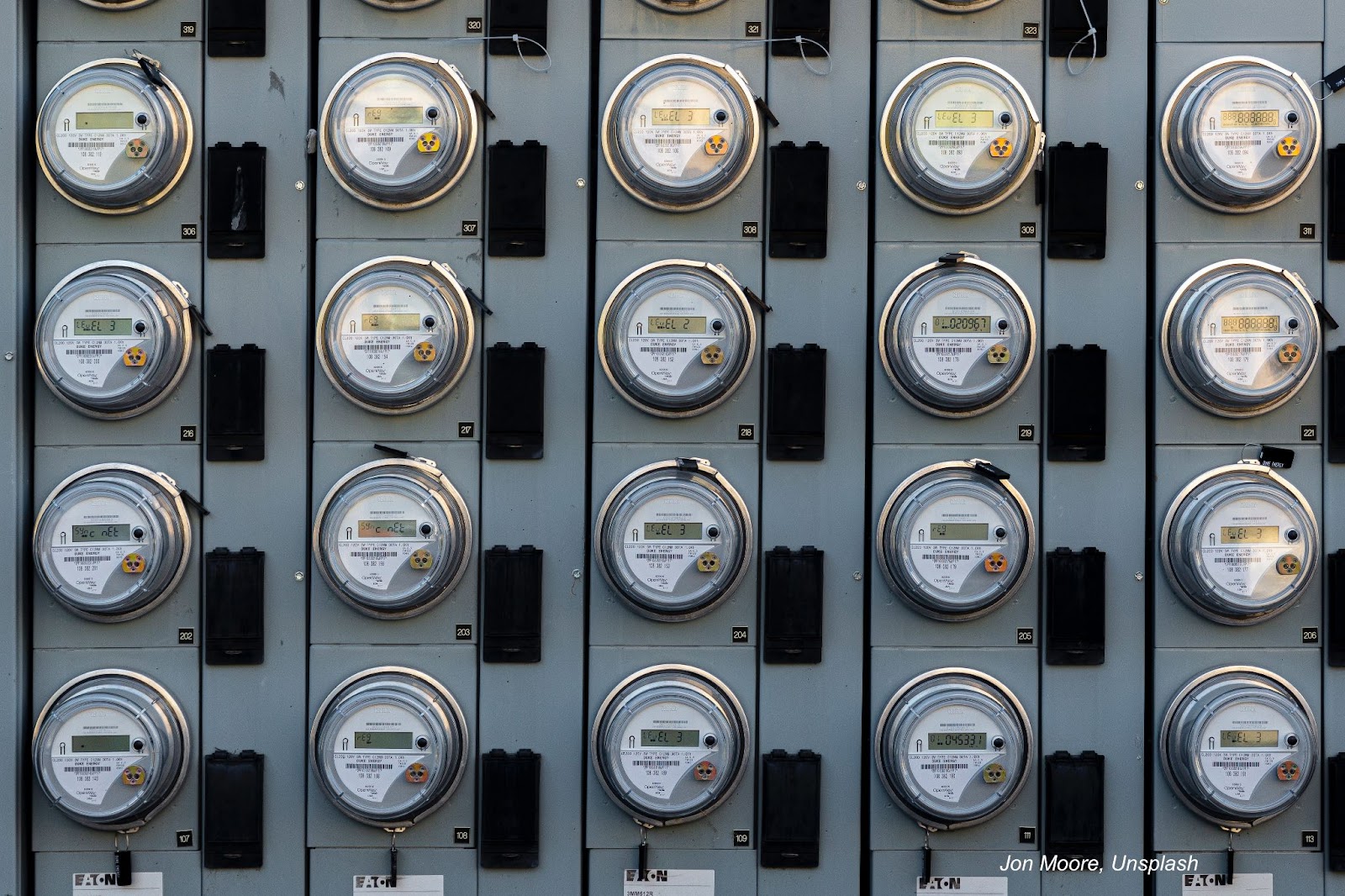 Electricity costs keep rising in California, making it harder to decarbonize the economy. With higher power prices, customers are less likely to switch from natural gas (for heating and appliances) and gasoline (for transportation). That was the subject of a recent hearing at the California Public Utility Commission that sought ideas to cut costs.

In an annual report to the legislature on affordability trends (PDF) for electricity, the Commission says PG&E rates have increased by 37% since 2013, largely due to rising investments in transmission. Revenue requirements for transmission have more than tripled from 2010 to 2020 (see figure). 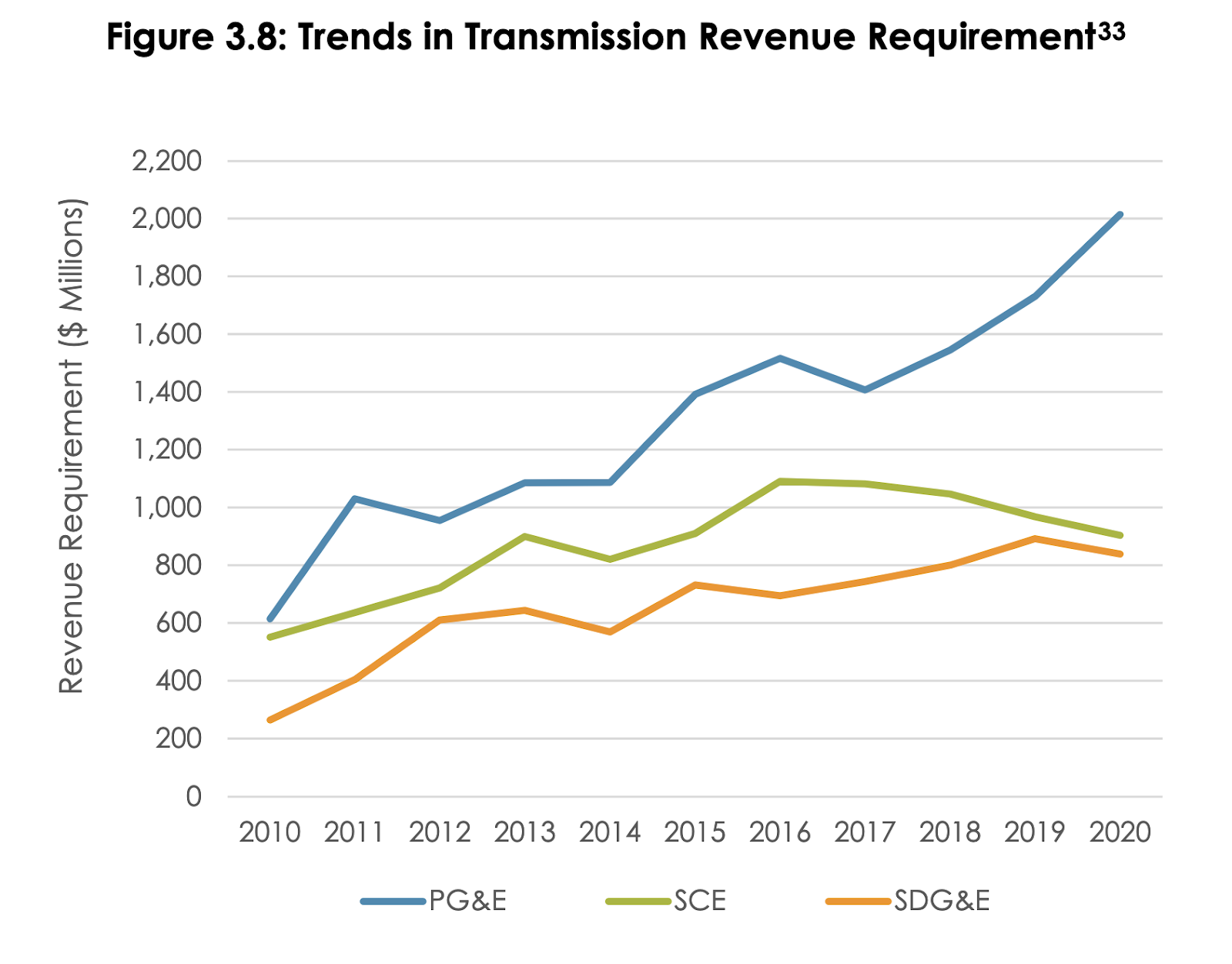 PG&E rates are also being affected by financial commitments to wildfire mitigation and investments in transportation electrification, and by returns on equity (ROE) that are higher than the national average, the report says.

Wildfire mitigation efforts -- related mostly to transmission and distribution -- will be especially expensive going forward, as PG&E recently announced plans to spend $10 billion putting 3,600 miles of power lines underground, to prevent them from sparking fires. This would increase bills for an average residential customer by $30 per month. Last summer, PG&E announced a broader goal of undergrounding 10,000 miles of lines.

The CPUC report expects rates will continue to rise at 3.7% per year through 2030, rising from 24¢ to 33¢ per kilowatt-hour, well in excess of inflation. California customers have long had higher rates but lower bills than customers in other states, thanks to strong energy efficiency programs and a mild climate in coastal regions. But that is beginning to change. In a ranking of 200 investor-owned utilities in the US, residential bills for PG&E customers rose to 70th place (PDF) in 2019.

While EBCE procures electricity on behalf of its member cities and customers, costs for transmission, distribution, and other services are charged by PG&E, who continues to own and operate the grid. When PG&E raises rates for transmission, the PG&E portion of EBCE customer bills will reflect that increase.

Interestingly, the cost of power generation has not been rising much, on average, even as California moves to higher levels of renewable energy. The CPUC reports (PDF) that “from 2003 to 2019, the weighted average time-of-delivery adjusted price of contracts approved by the CPUC has increased from 9.4 ¢/kWh to 10.0 ¢/kWh in nominal dollars.” While early solar power contracts were quite expensive, steadily falling prices have made utility-scale solar the most affordable source of new generation. However, a recent runup in natural gas prices plus a drought that cut hydropower output contributed to PG&E raising their rates by 9% in early March.

Rising costs pose a growing burden on low-income households, but also threaten some of California’s climate goals. The state’s power supply is headed for zero emissions by 2045, by mandate of the legislature’s SB 100 law. EBCE has committed to hitting that goal 15 years earlier, by 2030.

The state is also shooting to cut carbon pollution from other sectors, largely by using clean electricity to replace gasoline and diesel in vehicles and natural gas in buildings.

Already, electricity is much cheaper than gasoline per mile of travel, thanks to the much higher energy efficiency of electric vehicles (EVs). A Tesla Model 3, the best-selling electric car in the world (and made in Fremont) gets the equivalent of 142 miles per gallon of gasoline.

But the upfront cost of electric vehicles is higher, and the state needs to build out a network of public EV charging stations. EBCE has begun to build public chargers in its service territory.

And while new all-electric buildings are cost effective, since they don’t need expensive copper gas lines, it is much more difficult to convert existing buildings. A study for the City of Berkeley found upfront costs to fully electrify existing homes range from $20,000 to $40,000, with payback periods longer than 15 years. Plus, electric rate structures can make it more expensive to operate electric buildings in many cases.

Rebates, low-cost financing, and other strategies can be used to reduce upfront costs, while solar, energy efficiency, and the right rate structures can cut operating costs.

Still, rising electricity prices make it less attractive to go electric, for both vehicles and buildings.

To get a handle on the affordability of electricity, the CPUC opened a docket in 2018 (R.18-07-006 (PDF)), and is continuing to take comments and hold hearings.

EBCE has been participating, working with other stakeholders to find ways to reduce rising costs. At a hearing on February 28 covering non-ratepayer sources of funding, EBCE’s Melissa Brandt, Vice President of Public Policy and Deputy General Counsel, presented a proposal on “Equitably Electrifying California (PDF).”

revenues instead of electric utility rates,” Brandt told the panel. “It would reduce the rate of bill increases we’ve seen, plus pay for social policy programs in a more progressive way, based on income taxes.”

She estimates the plan would shift about $2.7 billion a year from electric ratepayers to taxpayers.

“It is not comprehensive by itself, but is a piece of a larger multi-faceted solution,” she says. “The goal is to prevent electric rates from reaching a point that discourages electrification.”

Other panelists proposed paying for building electrification with point-of-sale requirements when buildings and homes are bought and sold, state ownership and financing of transmission infrastructure, and paying for transportation electrification costs through a gasoline charge, among other strategies.